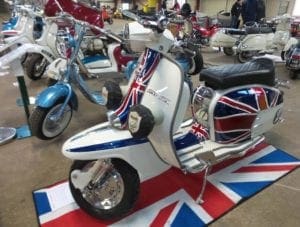 It may seem a long way off at the moment, but after the success of Scooter World and Retro Revival halls in 2018, it’s not too soon to start booking yourself a place for the 2019 event.

The format of the scooter halls, retro area plus a paddock hall worked well last year. So it will be a case of building on that success with just a few tweaks here and there.

Come into the main scooter hall and you’ll be greeted by a selection of anything from a collection of pristine scooters, through to the more ‘in-vogue’ rats and rustos, all displayed courtesy of the various clubs and independent riders from around the UK. Interspersed amongst these will be the ever-growing amount of related displays and trade stands.

Move through into the retro area and you’ll find Mod Radio acting as the central focus on the peripheral of the centralised ‘chill-out’ refreshment/café area surrounded by an eclectic mix of retro-related displays.

The paddock hall will be bigger and bigger than in 2018. Plans for this area hit a few technical and non-technical issues (beyond the control of the event organisers) at the last event; but what did work well was the ‘Fire-up’ area, so that success will be built upon for 2019 – and if you have an interesting bike and you’d like to fire up and talk about, then let the show team know when you’re booking your space.

Interest in the halls is gathering motion already, so we suggest going to the website below to download the relevant entry form and send it in as soon as possible. Space could be limited and you don’t want to miss out!

Team S Equipe will have a club stand at Scooter World. This well-known scooter sportsman team originated in the late Sixties – the idea and inspiration of the legendary Arthur Francis; original team members included Neville Frost, Nick Barnes and John and Norman Ronald. This small group of scooterists took part in all the major events of the day and won many prestigious awards.

During the ‘Scooter World’ weekend Team S Equipe will show film footage of the late Sixties/early Seventies scooter scene, including film from a well-known Nottingham scooter rally of the day, the 1969 Isle of Man Scooter Rally (including sand racing on Douglas Seafront) and also the very first scooter racing events at Mallory Park. This will be the first time this film footage has been shown in public and should not be missed!

Team S Equipe would also like to invite owners of original or replica Lambretta S-Type scooters to display their scooters on the Team S Equipe club stand. All club stand entries must be in by October 31, 2018 at the latest and your scooter must be available on the stand from January 4, 2019 (Friday afternoon) until January 6, 2019 (Sunday afternoon).

Please contact either Alan Cooper or Norman Ronald via www.teamsequipe.com email teamsequipe@virginmedia.com or via the Team S Equipe Facebook page.