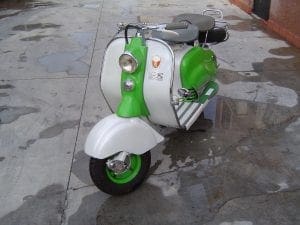 Although he originally hails from Lincolnshire Jorge has now fully embraced the Spanish scooterist scene on the island of Mallorca where he is part of a group of young lads that I believe are an inspiration to the new wave of scooterists that are now appearing in our ranks.

I first met him as I was riding to one of our local events and spotted a wonderful cross-section of scooterists riding some really wonderful scooters; amongst them was a group of younger riders who weren’t part of a particular scooter club, but had just tagged along. I struck up a conversation with one of them – Jorge – and found him to be both a credit and an inspiration to the new scooterist scene that is developing here in Mallorca.

Jorge was just 16 years old when he decided he wanted to buy a classic scooter. Then he came across this Eibar LD which had been languishing, unrestored, in a friend’s barn. So he purchased the bike and totally rebuilt it and affectionately named it Lummi. He now rides it whenever he can. 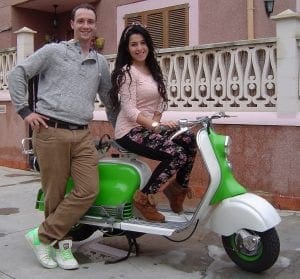 Owner: George Jonathan Finch Martinez
Age: 25
Job: student
Scooter club: none – just a group of friends
First scooter interest: I was 14 when my father gave me a Yamaha Aerox 50
Favourite scooter model: TV 175
Favourite scooter rally: haven’t been to any yet; however, I’d so like to go to a EuroLambretta rally Where do you see the Mallorcan scooterist scene going: I’d like to personally open a new club over here – and an official Lambretta shop. 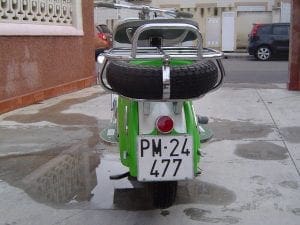 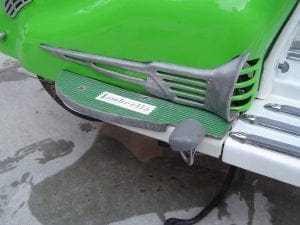 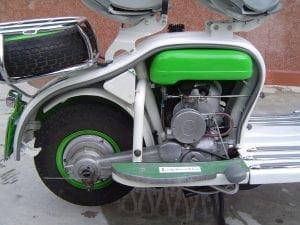 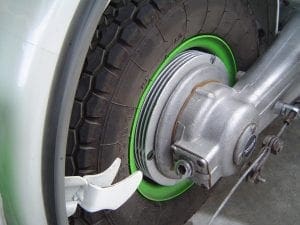 My Lummi!
Year/model: 1957 LD 125
Is the scooter reliable: totally; I can travel around the whole island (about 380km) with no problems whatsoever.
Paintwork: M Riere (Calvia Paintshop )
Overall rebuild cost: in the region of £5000
Anything left to add: No not really – perhaps a straight exhaust
Favourite scooter dealer: Rimini Lambretta

The history of Lambretta in Spain is both long and colourful. It began on the June 17, 1952 when a group of prominent Basque businessmen created ‘Lambretta Locomociones SA’ with the aim of manufacturing Lambretta scooters under licence. A factory was built in Eibar (Northern Spain) in 1953 and initially had 28 workers with the factory having contacts externally for the supply of certain components. Proper production began in earnest during 1954 and finally ceased 35 years later in 1989 (a production run longer than that of Innocenti).

It is reported that at the Barcelona show in 1953, Lambretta Locomociones displayed the D and LD scooters along with the FB and FC three-wheelers. It is likely that these were actually Innocenti produced machines and that early Spanish sales were of Italian produced models. The first Spanish-built Lambretta was the 125/150cc D and was quickly followed by 125/150cc LD models. It is believed that the Spanish factory also produced a D model based Lambretta three-wheeler. Unfortunately little is known of these early variants other than that D models featured a unique enclosed cylinder cooling system due to overheating problems.

The LD was known in Spain as the A and production began in July 1954 and would run through to 1962. LD models are essentially the same as the Italian produced version except for badging differences and the extensive use of locally produced parts. Like all Spanish produced Lambrettas, the quality was very high due to the parent company’s experience in working with metals (especially castings for guns and machine tools) and their close working relationship with Innocenti.

The LD would have no real modifications during its production, though the first versions built between 1954 and 1957 are recognisable by the carb inspection flap on the sidepanel on the kick-start side of the scooter and different badging from their Italian cousins. The second version of the LD, began production in 1957 and had sidepanels with no inspection flap and the petrol and carb taps were now mounted on the frame by the riders’ feet (on the right-hand side).

Domestic sales proved very good and by 1960 production of Spanish Lambretta’s had reached 50,000 units. In 1961, the LD was superseded by the Spanish-built Series 2 models with their LD-like ‘turning’ front mudguards. The LD carried on being produced, but its days were numbered with production ending in 1962. During the years of production the LD, which was marketed with the slogan ‘Elegance and perfect balance’ and sold well in the home domestic market. This was reflected in the workforce being increased, which by 1962 was some 410 workers. The popularity of the LD in the home market, means they are hard to find in the UK.

THE END FOR SPANISH LAMBRETTA PRODUCTION

In 1982 Lambretta Locomociones SA changed its name to Lambretta SAL following a change of ownership. A downfall in the company’s fortunes saw a further change of ownership in 1985 and production transferred to a shared factory in Amurrio. By the late 1980s sales had fallen even further and scooters were only being built on a made-to-order batch basis. Production finally ceased in 1989.

[ED’S NOTE: This information was compiled with the help of marque experts Perry Lewis (Totally Scooters), and ‘Colonel Mustard’. Their input is much appreciated]