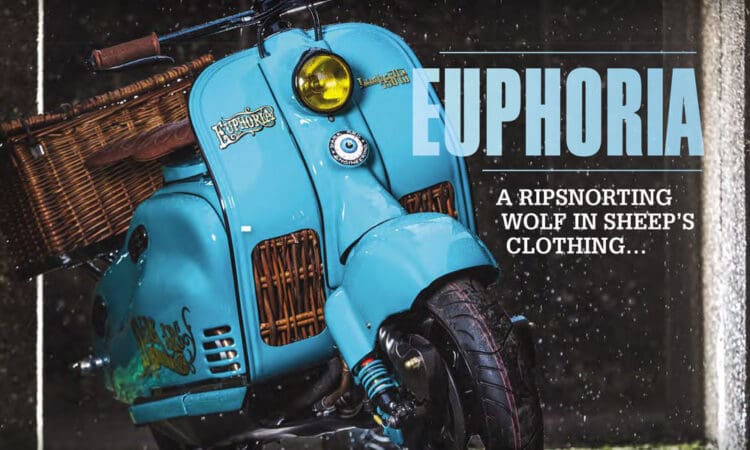 We take a look at the ripsnorting wolf in sheep’s clothing. PLUS, is this the ultimate mod scooter?

Simply put, Scootering is the number one scooter magazine in the world featuring stunning restorations and customisations, news, reviews, technical advice and an unrivalled insight into the scooter scene.

A wolf in sheep’s clothing is probably the best way to describe Aubrey’s Aprilia SXV550 Lambretta Ld150 hybrid and the name, Euphoria, adds to the disguise…

With its new factory, new management team and fresh vision, Scomadi is determined to separate itself from the herd and the SSS is its statement of intent.

The imagination of the human mind never ceases to amaze. The desire to create something different in the world of custom scooters will always exist. Liquid personifies that desire.

PLUS! Scooter Trader; Dealer Profiles; Kickstart and you show us your scoots!

Scootering magazine is on sale in UK newsagents and supermarkets, and you can buy the current issue in digital and paper formats here!

You can also buy stacks of back issues, but it’s cheaper to subscribe. Subscribers save money, get their copies delivered to their doorstep and never miss an issue.