Vespas resting amongst the rocks may provide some strange images – but there’s nothing stranger than what took place in South West Africa (in what’s now known as Namibia) during 1968. The words of Julius Caesar “Veni, Vidi, Vici” used in the title of this article translate from Latin into English as “I came, I saw, I conquered”. This is a story of three Vespas and their fearless team on an epic adventure. 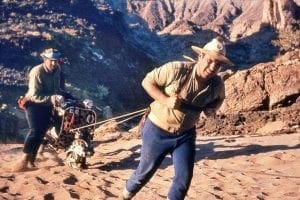 In 1968 the Cape Town Vespa Club took on the biggest canyon in the southern hemisphere, the Fish River Canyon situated in Namibia. It is the largest canyon in the southern hemisphere and is the second largest canyon in the world (the USA’s Grand Canyon being the largest). It’s also considered to be one of Southern Africa’s toughest hikes. The river is seasonal, flowing in the rainy season from January to April and can become a raging torrent. In the dry and peak hiking season (May to September) there’s almost no water with the exception of one or two long pools. It’s mostly made-up of a series of varying sized smaller pools (sometimes just puddles) separated by huge boulders and other obstacles like fine soft sand and thick caked mud.

Earlier, the Cape Town Vespa Club had made a bet that some its own members would be the first to take a vehicle through the canyon and three scooters were sponsored by Grosvenor Motors, and tuned for ‘canyon conditions’ by six friends Johnnie Johnson (Expedition leader), Graham Nell (Club Captain), Tony Beckley, Terry Davidson, Peter Derichs and Aubrey Jackson. These sponsored scooters, when donated, weren’t operational or roadworthy and had to be rebuilt with spares – also thankfully supplied by Grosvenor Motors who had the Vespa franchise at that time. The Vespas were painted in the colours of Namibian ‘indigenous’ animals.

All this had begun with a dream of being the first to put down tyre tracks inside the canyon. The six men knew that the expedition would entail severe exertion and hardship. Therefore intense physical training was a top priority. Expedition members no longer drove to work, they walked; and instead of taking elevators they used the staircase. During their weekend training sessions they particularly emphasised practical exercises; they pushed their scooters to the top of steep roads and sand dunes and up the rocky paths of Table Mountain. They practised transporting the vehicles across water in a rubber dinghy; with Vespa exhaust fumes they inflated the dinghy in just two minutes. 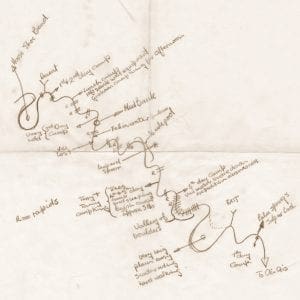 It was Tuesday July 9, 1968 and after six months of intense preparation, the men were finally ready to set-off. The team members met at the Cape Argus Building and loaded their Vespas, spare parts and equipment onto the jeep of tour guide, Louis Greef. Confidently they drove north all night. After a puncture on the way they arrived at the viewing point at the Fish River Canyon around midday on Wednesday – and were overwhelmed by the incredible landscape. Three Vespas, painted in the safari colours of a leopard (‘Vici’, a 125cc Vespa), giraffe (‘Vidi’, a 125cc Vespa), and a zebra (‘Veni’, a 150cc Vespa), set-off from Cape Town, heading north into what was then South West Africa.

Taking a scooter through the Fish River Canyon? Impossible! This would be the reaction of any sensible person but the team would not be swayed! Hikers usually need two hours for the 500 metre descent, but the Vespa team took a total of two-and-a-half days in extreme climatic conditions. The thermometer dropped to 8-degrees Celsius at night, but midday-temperatures in the canyon rose to around 40-degrees Celsius. They misjudged their water consumption and ran out of water on the descent and had to go thirsty – there were water pools on the canyon base, but they had to there before they could make use of them. Having finally hoisted the scooters down the steep rock faces and loose rubble by means of safety ropes and winches, dragging and shoving the scooters over boulders with sheer brawn… It was an incredibly exhausting endeavour and five of the men sustained injuries which required treatment. 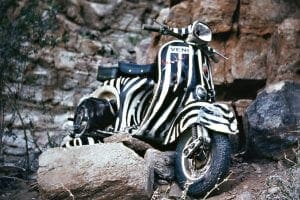 The biggest catastrophe during the descent, however, was the loss of ‘Veni’. The loose shale and rocks wore through a safety rope sending ‘Veni’ over a cliff edge; after cartwheeling down 100 feet (narrowly missing a team member on the way) she came to rest right side up in a ravine. A brief inspection revealed a twisted chassis and that the steering head had snapped; the sharp rocks had also pierced her engine casing, so the scooter had to be left behind for good. At that point, the decision was made to dismantle the two remaining scooters and carry them down the rocky terrain in pieces.

They made history on the evening of July 12, when Vici was the first Vespa to make it to the bottom of the canyon, true to the meaning her name ‘Vici’. The men were completely worn-out by this time, but still managed to bring ‘Vidi’ into the camp as well. During the evening, both scooters were reassembled by torch light. Amazingly the first scooter started on the second kick and the other scooter started on the third. History had been made; for the first time the internal combustion engine had disturbed the silence of the canyon base.

Saturday morning, July 13, 1968, saw another first for the canyon when Vidi laid the first tyre tracks as the journey through the canyon continued. ‘Vici’ also scored another timeline landmark as the first scooter to be transported on the river when Aubrey and Peter decided to load ‘Vici’ into the rubber dinghy and let the Fish River take care of transporting her. The idea of rafting a Vespa was a good one, but by having to negotiate the boulders between pools it didn’t in reality, make it any easier or faster even though the adventurers had a man on each bank pulling and guiding the raft downstream.

The other four men were determined to move ‘Vidi’ along on land. The scooter was pushed, kicked, pulled, lifted – the Vespa was running in only first gear and to make any progress at all in the fine sand, it was necessary at times for two men put their backs into it and pull, while the other two pushed. Sand was in every nook and cranny and the engine stalled frequently.

Never losing hope, the expedition continued. It was a struggle with the two remaining Vespas making slow progress. The trip with the rubber dinghy was eventful too and ended with a mishap. All the equipment fell into the water and got wet. So the men changed their strategy: they guided the dinghy with the Vespa aboard downstream with the help of ropes and carried the luggage themselves. In their bid to move the Vespas along, the men had to get into the water at times. The Fish River is icy-cold, on average only about 48-degrees Fahrenheit (9-degrees Celsius). They were shaken by cramps. Despite their gruelling efforts they managed less than 2km per day on these two days.

There was another accident on July 15. The dinghy capsized as they tried to take ‘Vici’ across the river. The scooter slid into the water and pulled Aubrey (who was swimming alongside) down with it. The men on the riverbank were paralysed with horror. Then Aubrey‘s head surfaced again and clinging to the dinghy he came ashore in shock and totally exhausted. The men managed to salvage part of the equipment, but ‘Vici’s’ campaign of conquest was over.

Utterly discouraged, they pitched their third camp. Not only had they lost another scooter, but practically they had made no progress either, despite energy-sapping efforts. Their worst enemy was time, which slipped away relentlessly. The permit which the SWA Administration granted for the expedition was only valid until July 18, and their provisions were also dwindling… 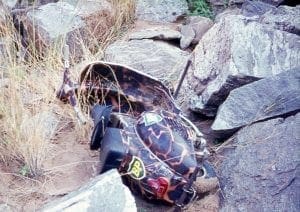 The following two days the men continued to battle their way through the canyon with ‘Vidi’. In the course of the morning of July 17, 36 students from the Pretoria Technical College caught up with them. The students were utterly amazed to find Vespas and tyre marks in the canyon. Disbelievingly they continue on their way. Later-on, the Vespa expedition found a message written into the fine sand: “YOU ARE MAD”, it read.

Midday holds bad news for the ‘Vidi’ team: the Vespa’s engine wouldn’t start and spare parts were needed to repair it. Water, mud and fine sand had finally put paid to the engine. The spare parts had gone down in the river with ‘Vici’.

With a heavy heart the men left the last scooter behind, half-hidden under rocks. They solemnly resolved to come back the following year and finish their mission. They collected their gear and got going to the sulphur springs which were in the vicinity of the escape route. They had 10 miles (16km) ahead of them, with the sun beating down relentlessly – and their provisions were finished. Some pieces of luggage weighed 30 kg…

At some stage, the palm trees at the sulphur springs appeared in their field of vision. They dragged themselves there with their last bit of energy, dropped their luggage and clothes and took a bath in the healing water. It was their first bath after a strenuous eight day adventure.

On Friday morning, July 19, 1968, the adventurous scooter expedition came to an end at the Argus Building in Cape Town, where it had started ten days earlier.

Although the three Vespas did not return from the Fish River Canyon, they did succeed in their mission of becoming the first, and most likely the only vehicles to lay tracks inside the canyon. They set about changing the hearts of many aspiring adventurers and had an experience they would never forget.

Today Vidi  watches  silently  from the rocks only about 10m to the left of the path (although she has now been repainted in zebra stripes since this picture was taken). Hikers pass her by on a stretch of thick sand  where  they  concentrate  on  the  going rather than their surroundings. Even though the  scooters  never made it out of the canyon, out, the intrepid adventurers had succeeded in putting the first motorised tyre tracks in the Fish River Canyon. Veni, Vidi, Vici!

For more information and photos about this audacious Vespa adventure, visit the comprehensive website at: www.fishrivercanyon1968vespaexpedition.com

Thanks to the following for their help and input into the creation of this article
Tony Beckley and Peter Derichs (members of the original expedition)
Jim Trewin (for initially researching this article on behalf of Classic Scooterist)www.gondwana-collection.com/gondwana-stories/gondwana-stories-single-view/artikel/vespa-veterans-recall-their-never-to-be-repeated-canyon-adventure/
www.fishrivercanyon1968vespaexpedition.com/Vespa_in_the_Fsh_River_Canyon/
http://poserscooterclub.blogspot.co.uk/2014/07/veni-vedi-and-vici.html