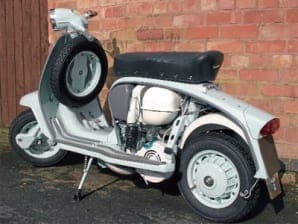 At times I wish I had a time machine, because if I did, I’d go back to 1967 and I’d be asking the Innocenti bosses why they were building a hybrid Li 125 – the Series 4; in fact why did they choose to build around 1400 of them?

It is fair to say that the reason why the Series 4 was built will (unless someone can say otherwise) stay shrouded in mystery. The Series 3 Li 125 had ceased production in mid-1967 with the previous year seeing the SX 150 and SX 200 come into production. Anyone wanting a sporty 125 machine could have had the Li 125 Special which had come into production in October of 1965 and remained in production until January 1969.

So, the question remains: “Why build a Series 4 Li 125?” My firm belief (unless anyone else knows otherwise) is that the Series 4 Li 125 was an order for a government or organisation somewhere in the world who wanted a standard scooter that could be used in a utilitarian way. In fact anyone who initially looks at the Series 4 machine would assume that it’s simply a Series 3 with clip-on sidepanels. Not so – as we will see later.

The paint scheme looks similar to the Series 3 but it’s not the same with the paint on the Series 4 being more blue in nature than green. A spectrum test of the paintwork on my Series 4 (prior to its restoration) showed that the nearest colour to it was Alfa Romeo Space Blue. Above all, I think we can safely assume that it was never intended as a machine that ‘Joe (or should that be Giuseppe?) Public’ could buy – and I say that because no advertising literature or promotional material exists for it. There are not even any road tests for it either, adding some more weight to my argument that it was built as a special order – but who for? More importantly, why was the order never fulfilled?

As I have said, the scooter outwardly looks very similar to the Series 3 machine. It’s not until you look close that the differences become apparent with the most obvious one being the use of clip-on sidepanels (these would become stock items on the SX range in 1968). The panel clips being the same items used on the later SX machines and the GP range. Also, the rear frame badge shows Lambretta Innocenti in black on a white background and again this was used on the Li 125 Special and SX machines.

The legshields are the non-chrome ring type and the horncast on the Series 4 is the later type that uses the oblong Innocenti badge and not the earlier type that featured the Innocenti shield. I had originally thought that it was a completely different casting but I have checked the one on my Series 4 against that on my Series 3 (which also has a later horncast) and these are the same. The oblong badge would also feature on the later SX machines and the horncast being the same would show that Innocenti continued to use up existing supplies of bodywork that they had at the factory.

Mind you, take a look at the horncast badge – forgive me that the dark blue which should be behind the name Innocenti isn’t on mine (too much cleaning by a previous owner?) but look closely and you’ll see the ridges that run across the badge, making it slightly different to the usual oblong badge. Another Series 4 quirk?

Before looking underneath the sidepanels there is the small question of the forks used on the Series 4. Anyone looking at the bottom end of these will see that they are the type that take the push-in (rather then bolt-in) buffers, a change that would hit the SX range in 1968. The forks are standard Li length and not the shorter GP type items.

Removing the clip-on sidepanels shows that Innocenti used the same petrol tank and air filter box found on the Series 3 Li 125. However, the toolbox was now replaced by a grey plastic item – on some examples metal toolboxes have been found. I think that this is simply Innocenti doing what motor manufacturers do and using up remaining stock they had lying around. The engine itself is interesting, with mine having the same barrel and cylinder head as the Li 125 Special; it also had the same gearbox as the Li 125 Special/GP 200 and had a 15 x 46 setup.

I think it’s fair to say that although the Series 4 Li utilised some components that Innocenti already had lying about the Milan factory, it also showcased some new items (clip-on panels, push-in fork buffers, etc). It seems to have become the norm for people to say that the clip-on panels (for example) are like those used on the later SX range. How about changing that and saying that the later SX range features items from first seen on the Series 4 Li 125? Maybe the scooter was a way of showcasing how Innocenti could save money when producing a scooter.

Despite spending a lot of time searching for answers as to the reason why Innocenti built the Series 4 Li 125, I have had no luck. Without its sidepanels on it would pass for a Series 3 machine; the frame stamping is the only give-away then. Of the 1400 I know of at least 10 are in this country, but there may be more. A recent chat to Pete Merchant at Solely Scooters saw him telling me that the first time he saw an Li 4 was some 20 years ago and he has only seen three others since – so a rare beast indeed.

However, I don’t think the Li 4 will ever hold the kudos that some other rare models do (ie the GP 200 Electronic and the TV 200). But when it comes down to it that doesn’t matter, because value doesn’t matter to me. Solving the mystery of the Li 4 on the other hand – now that does matter!

Get the latest Scootering Magazine updates straight to your inbox plus a FREE back issue to read right now, sign up below...

You can unsubscribe at any time.