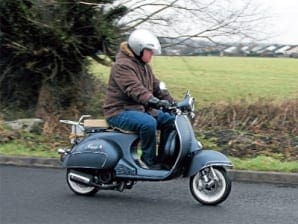 Reader warning: the images on these pages may cause die-hard Vespa fans to spit cornflakes over their magazine.

I’m beginning to wonder if scooter giant Piaggio have taken their eye off the ball? Firstly they discontinued the PX which allowed LML to grab the traditional geared scooter market – a job they did so well that Piaggio did a major u-turn and re-launched the PX125. They’ve also missed another trick by letting a Chinese company clone the vintage Vespa shape and corner a niche market with a retro-styled automatic scooter.

I’m sure most internet savvy readers have been watching the progress of the Neco since it was first spotted on American scooter websites, badged as the Hammerhead. Early reports were favourable and even die-hard traditional scooter riders and Vespa fans loved the idea of a vintage shape with modern internals and running gear.

Well it’s over here now and no matter what you think of a company that’s prepared to plagiarise our scooter heritage, you can’t argue that it looks very tasty.

We were invited down to Bristol-based Eddy Bullet (which incidentally has a new showroom) to sample its demonstrator.

Having only seen photos of the Neco, I was a bit worried that the real thing wouldn’t live up to my expectations. Thankfully I was wrong. Okay the bodywork may be plastic covering a steel frame (rather than formed from steel), and the dummy spare wheel is actually a small storage space, but overall the Neco is still aesthetically pleasing, and the matt finished gunmetal grey paint job actually gives the appearance of metal.

There are a few tacky bits, such as the chrome indicators, rear light and number plate bracket, but they could easily be replaced with some more discreet ones; in fact Eddy Bullet has a vintage Vespa rear light which can be fitted to tidy things up and allow the number plate to sit in the usual place.

The Neco Abruzzi range is available with three different four-stroke automatic engines: a 50cc (using a KYMCO unit), a fuel-injected learner-legal 125cc using a GY6 engine (a popular generic Honda unit which is tried and trusted and has scope for tuning, as well as being very easy to buy parts for) and a 150cc engine which we’ll see over here later in the year. The engine has plug-in diagnostics which, apart from making servicing and fault finding easier, also means the engine mapping can be altered to improve the way it works.

Necos are imported into the UK by AK International and backed by a two year warranty, which is not something you get every day on Chinese scooters.

The Neco Abruzzi mimics the timeless Vespa styling well, but it has been brought up to date by using hydraulic disc brakes front and rear; there’s also a nice-looking blue lit digital dash with speed, odometer, temperature and fuel gauge. A clock and trip function would have been nice, but not to worry.

Any Vespa rider will feel instantly at home on an Abruzzi because it feels very similar both in height and seating position. The handlebars are perfect and even feature PX-style switchgear, albeit with the addition of a starter button and engine cut-out switch.

The single sprung seats (a twin seat is available) look quite nice, but felt a little too soft for me – although the spring can be adjusted to increase or decrease the tension, so that should help.

The Neco has electric start (a kick-start is fitted as back-up) and it started easily on the button, as you’d expect. Pulling away felt just like it would on any auto scooter, the wheelbase is a bit longer than on a Vespa but you couldn’t help feeling you were riding a modern recreation of a classic scooter rather than a Chinese clone. Just looking down at the familiar layout of the headset, seeing the turning front mudguard and using the familiar switches made me feel instantly at home.

The 125cc engine on our test scooter pulled away cleanly and was quite nippy from a standing start, despite being new.

It’s by no means the fastest learner-legal scooter on the road but it was quick enough to let me feel safe on it and should hit around 60mph when run in.

Like any good rally-going scooter, this one took me to the seaside without hassle and I’ll be very surprised if we don’t see at least a couple of these on a rally this year – in fact I’ll eat my Arai if there aren’t a few at the Isle of Wight in August!

The Neco felt well put together and solid. It handled some pretty bumpy roads through the countryside and was well planted, although the sprung seat was bouncing me around a bit.

The scooter comes fitted with 60s style Taiwanese whitewall Innova tyres which were actually quite sticky; even on cold damp roads they gripped very well and you can sink a fingernail into the tread, so they should be good in the dry. Wheel sizes are 3.50x10in so there are plenty of aftermarket tyre options available. As you’d expect on a modern scooter, this one has disc brakes at both ends which work very well and provide good progressive stopping power.

The Neco Abruzzi gives modern scooter riders a retro thrill, but without the hassle of maintaining a vintage scooter.

It will never be an Italian icon, but it’s the closest you’re likely to get at the moment – unless, of course, Piaggio decide to recreate one of their classic styles to compete with scooters like this or the new Lambretta autos. Imagine an automatic 300cc Vespa Rally with disc brakes, modern suspension and an all-metal body, or maybe a twist and go 90SS with a 125cc engine?