Many riders wear them as an alternative to leathers – but have you ever considered what goes into manufacturing a pair of riding jeans. Mau investigates…

Although originally produced as a hard-wearing item of clothing, denim jeans have become somewhat of a popular fashion icon over the years. So it comes as no surprise that this versatile material eventually found its way into the manufacture of riding jeans. Of course, no safety conscious person should consider riding their bike in just a pair of fashion jeans, and this is where owning a good pair of protective riding jeans come into the equation. I took a trip to Norfolk to find out how they are made.

Hood Jeans are somewhat of a rarity in the manufacturing world, as their products are made here in the UK. The companies’ roots stretch way back to 1955 (meaning that this year, they’re celebrating 60 years of manufacturing history). Most of their production is currently done at a factory in Leicester, but their headquarters are in Norfolk – which is where I met owners Chris and Julie Easterford to find out what processes go into producing a pair of riding jeans.

It should be pointed out here that not all manufacturers use the same work methods. Hood employ a certain amount of hand-production in the production their products, whereas many other manufacturers processes are automated nowadays. Something else worth mentioning is that there’s a variety of para-aramid Kevlar-type protection products on the market with slightly varying working properties and different manufacturers often have their own fancy name for them. Hood currently uses a K-Tech para-aramid material, so for the purposes of this article I’m just sticking to referring to the material as ‘para-aramid’. The type of armour that can be fitted to riding jeans can also vary (the images here show D3O armour). As to the stitching the materials together – I’m not even going to attempt to tell you about all the different variations involved (cross-stitch, lock stitch, plain stitch, etc, etc).

HOW PROTECTIVE JEANS ARE PRODUCED 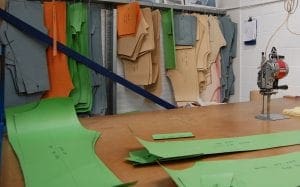 The process starts with a design pattern (normally consisting of two main leg panels, plus the pockets, waist band and other ancillaries). These are arranged on the outer denim to get the least waste possible out of the cutting. (Picture: Michael Barraclough). 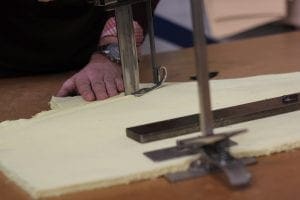 Here, the para-aramid inner protective lining is being cut to shape in several layers several layers at a time. Because of the nature of the material, cutting blades can be blunted very quickly. 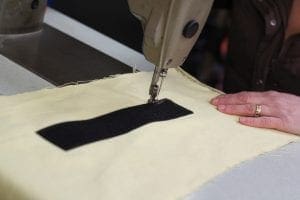 Positional red dots are then marked (hidden in this picture) so that a Velcro fastening for the armoured protection can be added. Some manufacturers use fixed position armour pockets, but the advantage of a Velcro fastening is that the armour can be moved to suit individual stature. 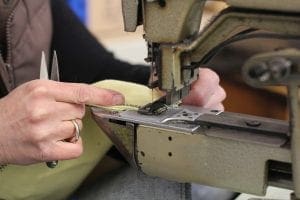 Sewing any Para-aramid is hard work (so imagine how hard it is for the emergency services to cut it off in an accident – so don’t have one)! Paradoxically using a thicker lining is normally cheaper (it tends to be more loosely wound); the trade-off is that the protection qualities can suffer. 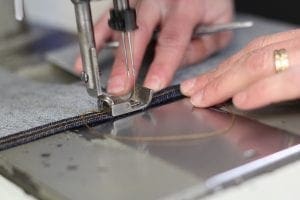 The stitching of the denim outer commences using a cord made from a mixture of thread and nylon, but to stitch-in the inner protective lining, a para-aramid thread is used. 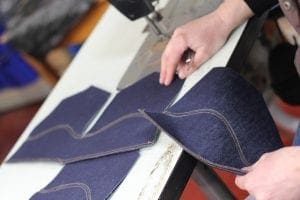 The outer pockets straight off the cutter could be mistaken for a line of bunting. Here they are being hemmed and a pattern added. 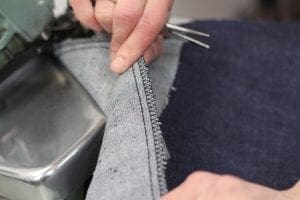 A safety stitch is added to help protect the seams. 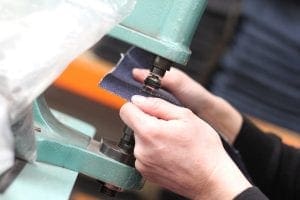 Rivets are inserted where needed. Every effort is made to avoid riveting through the tough para-aramid material if possible. 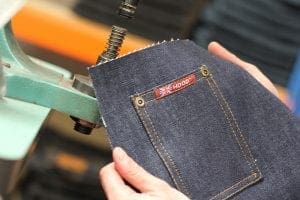 Mounted to the front trouser pocket, you’ll find that little coin pocket that you can never get your finger in… 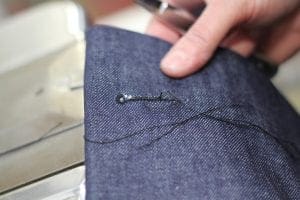 A clever machine cuts and stitches a hole for the fly stud to go through. 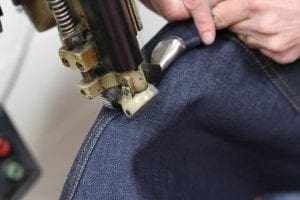 The front and back half of the jeans being stitched together. 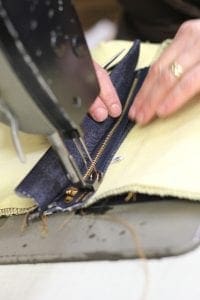 The first time the para-aramid and denim material meet is when the fly zip is stitched on. 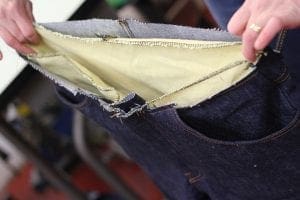 The inner lining is now ready to be stitched into position (note that the waistband has not been added at this stage). 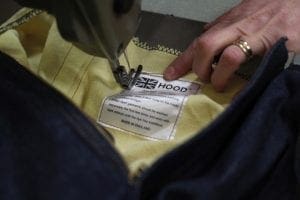 The label for the washing instructions is stitched inside. 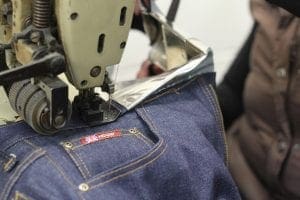 A clever little attachment folds the waistband material as it is stitched to the rest of the trousers. 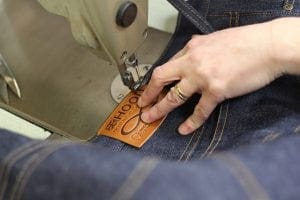 The brand label is added. 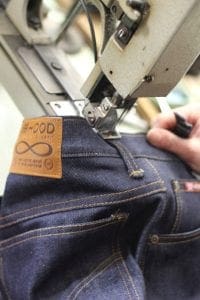 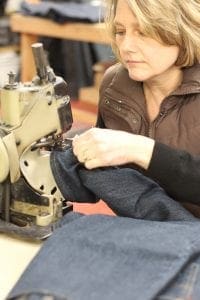 Stitching the bottom of the legs is normally left till last; then if a customer requests a specific leg length requirement, it can be adjusted at this final stage.

DO’S & DONT’S
for buying a pair of jeans

DO check the para-aramid lining; small individually fitted patches offer less protection than an overall one-piece fitting. Some companies only use a minimum amount to claim their product is protectively lined. The amount of lining fitted also determines the CE level protection rating.

DO check on how the armour is mounted (stitched-in pockets aren’t movable if the positioning is wrong).

DON’T rely on the thickness of the denim; over time even heavyweight denim loses its strength (as does every product made from 100% cotton). Again this makes it important to purchase a product lined with a large coverage of abrasion protective material’.

DON’T be taken in by sales spiel

DON’T be afraid to ask questions

WHO ARE HOOD JEANS? 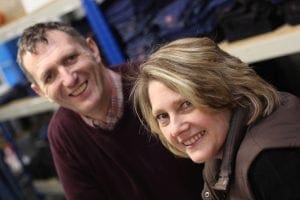 Based in Attleborough, Norfolk, Hood Jeans is a small, family-run company originally set-up by Chris and Julie Easterford in 1998 – but the roots of companies’ roots go back a lot further.

During 1955, Chris’s mother and father (June and Tom) both started their working life at Lee Cooper. This is where they first met each other and they eventually got married before leaving the company to help set-up another well-known company, Falmer Jeans. Then in the 1960s, Tom started his own business called the Motown Clothing Company, which was based in Essex (Motown is an abbreviated reference to the ‘Motortown City’ of Detroit – a place where coincidentally, Motown music also originated).

It was at this point that history repeated itself and Chris met his future wife Julie there before they eventually left to set-up their own design and manufacturing company. Chris and Julie spent the next few years designing jeans for many of the major high street names; during this time they were asked by a motocross team to design their race kit. They were given fabrics such as Cordura, Ballistic Nylon and Kevlar to use within the kit and gained much knowledge about their strengths. They continued working on the race kits for two years before combining those then new fabrics with their background knowledge in producing denim jeans; and so the seed for Hood Jeans was planted. Chris and Julie worked on those ideas over the next two years before launching the Hood Jeans brand in 1998.

The Hood K7 jean was one of the first motorcycle jeans launched in the UK and has arguably become one of the best and most respected brands on the market. Since then the company has constantly developed and added to their range. The company also launched a satellite business, by going into partnership with experts in K-tech soft knitted Para-aramid fabrics and K-tech threads. This project was named Kyrano-UK and the aim was to design and produce the best knitted Para-aramid reinforced motorcycle jeans on the market.

To this day, Hood Jeans remains a family run company with Chris and Julie enjoying the personal touch that this allows them to give their customers. Their business philosophy is quite simple; make the best product they can and sell it direct, thus cutting-out the middle man. This enables them to market top quality, British-made motorcycle jeans at competitive prices. Chris says: “Our customers have given us so much support and encouragement; it’s this backing that’s made us the company we are today”.

WHATS IN A NAME?

The companies’ name Hood and their jean brand Kyrano are actually named after puppet characters in the popular TV series, Thunderbirds! Their K7 jeans are named after Donald Campbell’s world-famous K7 Bluebird which broke many water speed records. 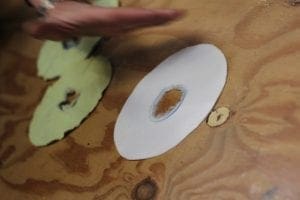 Hood Jeans are currently conducting an experiment with their partners to develop a new impact ‘reactor’ coating that can be applied to the para-aramid when it is stitched into a pair of jeans. It won’t mean that fitting armour is a thing of the past, but it will provide extra protection in the event of a fall or slide. In initial tests the revolutionary material works well. The process still needs a few tweaks, so it might be a while before the product hits the market – watch this space…