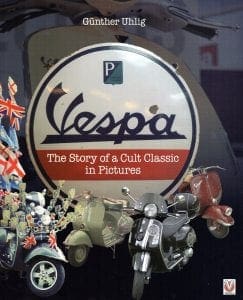 Generalist books on Vespa history (designed to appeal to the relatively unknowledgeable casual or new enthusiast) have emerged in great numbers in the last decade-or-so. This English language edition of a 2014 German book differs from all the others partly (as the title suggests) by being primarily a collection of pictures, and partly through the almost exclusive use of new photographs.

This lack of period imagery – save a few from Pontedera – does at least ensure that some of the duplication rife in other books is avoided. Whether it meets the expectations of purchasers is another matter. This book is taken from a German point of view of both history and the current scooter scene. This means that the emphasis on which models are important differs notably from a British (or even Italian) perspective, and that any Mod associations are totally ignored. The cover has presumably been reworked for this edition, since it features a GTS bedecked with an absurd amount of lights, mirrors and flags – not at all reflected in the actual content.

Fully 20% of the pages are given over to the ET4 and the current Vespa range – It’s difficult to imagine that this is actually what people want to pay money for. But on the credit side, the photography does at least convey some of the ‘joie de vivre’ of Vespa ownership around the world.

In conclusion, it’s difficult to see the appeal of this book to the British market since it’s not a work of reference, and does not really cover any elements of the current scooter scene as applicable to this country. But at least the production values (especially the standards of photography) are quite high, and some new to the scene will get value from their purchase.