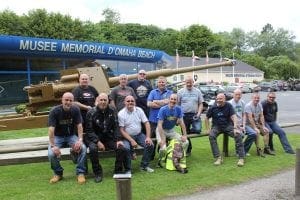 With so many scooter rallies now on the annual calendar some may say we’re spoilt for choice as to how we choose what to do. Whether you enjoy organised LCGB or VCB events, National Rallies with VFM do’s or local club scooter gatherings, it seems more and more are looking to travel further in search of that unique riding experience.

Hull Drifters SC members have been no different over the last few years, I’ve been lucky to be invited to ride with them to many events like the Coast-to-Coast, Blackpool pre-season and even Scooter Meltdown in Kalkar Germany in the bleak early months of the year.

After many trips in Europe as part of the FOS Tours from Grimsby and Cleethorpes, the Drifters decided to arrange a trip to visit the Normandy Beaches in France with club members and invited guests who’d enjoyed rides with them before.

It’s a big task to organise a road trip abroad and when around 13 riders are involved, it becomes even more challenging; Russ Barber took on the mantle of booking the ferry and accommodation; the route chosen was the obvious ferry from Hull to Zeebrugge, then ride down via Dunkirk to our base at Deuville, North West France, in the Normandy region – a stunning town. The hotel Russ booked was opposite a Marina that looked similar to Marseilles.

The journey was going to be a decent ride in one day, but all the riders were on board GTS auto or similar modern auto scooters, so with a couple of punctures on route, there was little to worry about as far as breakdowns went. However with all of us not being 17 anymore, it was probably our bodies that would feel the pressure of the trip more than our modern machines.

As usual the weather was very French – unpredictable and sunny, then wet; but it was cold, so with everyone in appropriate gear, we battled on towards our first destination. The lads had organised a surprise stop off on route for Mark Howlett (his Great Grandfather fought in the WW1 and was buried in one of the war cemeteries along the coast near Dunkirk, but Mark had never visited before). With usual Drifters sat nav taking us on a mystery tour we eventually arrived at Nieppe Bois (Rue Du Bois) British Cemetery. Stunned Mark made an emotional walk along the gravestones until he came across 220019 Lance Cpl, Alfred Harrison of the East Yorkshire Regiment – a very proud moment for Mark to pay tribute his very own family war hero.

Setting-off for another couple of hours riding, we arrived in the Normandy region, but a very spectacular Bridge en-route to challenge the nerves. Pont de Normandie looks amazing as you approach, but to be perfectly honest, it wasn’t anything like our very own Humber Bridge (heee heee).

The town of Deuville is superb and in the evenings it’s a hub of socialising with restaurants and bars spilling-out onto the pavement seating areas until late in the evening.

Next morning, on the first day of touring, everyone was up and ready; we had plenty of riding to do and the surprise for me was how far apart the whole beach invasion was for the landing forces of the Normandy D-Day campaign. Utah, Omaha, Gold, Sword and Juno were the main destinations for our tour; we also took-in a couple of war cemeteries and gun batteries along the route. The large American War cemetery at Coleville-sur-Mer was huge and as the sun set a bugle played the Last Post, remembering all those fallen soldiers that gave everything during the Normandy landings.

It was very long days to get all the sight-seeing we could fitted-in, but with our very own band of brothers, it was always a laugh, Waggy eating his fresh mussels and insisting on taking each beach in his own way had us all in stitches. I too had a couple of moments on the auto, not negotiating the bendy French lanes very well and nearly coming a cropper on gravel and doing a little grass cutting; we even celebrated a birthday at a MacDonalds with Keef.

After three days I was ready for a rest, so while the rest of the crew visited Pegasus Bridge and museum (probably the most impressive of all the sites) I took a break back at the hotel before the long ride home next day.

Due to P&O Ferries deciding to service our ferry home on the Sunday, we had to change routes for the return leg; back up through Normandy on nearly deserted roads we made really good time to Calais. Across to Dover, then as we rode back onto English soil, it was apparent that traffic was in chaos all the way up the M11. A few dramas on the busy roads home, we all soon managed to miss any rain until we got within spitting distance of North Lincolnshire and Hull. On with the wet gear and as we rode in heavy rain along the M180, it was time to split up until next time.

A fantastic journey and a great bunch of mates all doing what they do best; ride scooters, have a laugh, battle the elements and never leave a man down.